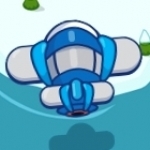 Sky Warrior, is a arcade game, fascinating and beautiful game in which you have to collect stars, life, ammunition, missiles, fuel and various improvements and destroy enemy aircraft and fighter! Sky Warrior is a terrific game which you can play for free in in friv50000.com. With Sky Warrior game, we supply many cool Friv 50000 games to play at no cost.

Use Left Mouse button to Drag to move, Use Arrow keys button to Move,